Quick and simple cilantro lime slaw made with shredded cabbage, fresh herbs, and a light, creamy dressing. Use this slaw as a fresh, tangy topping for fish, chicken, or pork tacos and so much more!

It's hard to resist a fresh, crunchy cabbage slaw, especially when it's piled high on a taco! I don't consider a fish taco complete without a tangy slaw on top.

Making this zesty cilantro lime slaw could not be easier and the flavor is so bright and fresh. For the perfect taco recipe to pile this slaw on, check out our Blackened Redfish Taco recipe next. And be sure to check our Creamy Southern Coleslaw recipe for more slaw inspiration!

Ingredients You Need To Make This Recipe

How To Make This Recipe

Whisk together the mayonnaise, lime juice, and sugar in a small mixing bowl.

In another medium mixing bowl, combine the cabbage, cilantro, green onions, and jalapeno with a wooden spoon. Drizzle dressing over top of the cabbage and toss to combine.

Make this slaw all your own by tweaking the ingredients to suit your taste! Here are some ways you can switch things up:

How To Serve Cilantro Lime Slaw

FAQs and Tips For The Best Slaw

What Is the Difference Between Slaw and Coleslaw?

Coleslaw and slaw are a bit different in that coleslaw is made primarily with cabbage and slaw, on the other hand, can be made with a number of different shredded vegetables, such as broccoli, brussel sprouts, fennel, and more.

This interesting article by Greatist goes into great detail about the origins of slaw!

Can Slaw Be Prepared The Night Before?

Once the cabbage and vegetables in slaw have been combined with the dressing, they begin to soften. It is best to prepare slaw within an hour or two of serving it for the best texture, although it is edible for up to three days after. 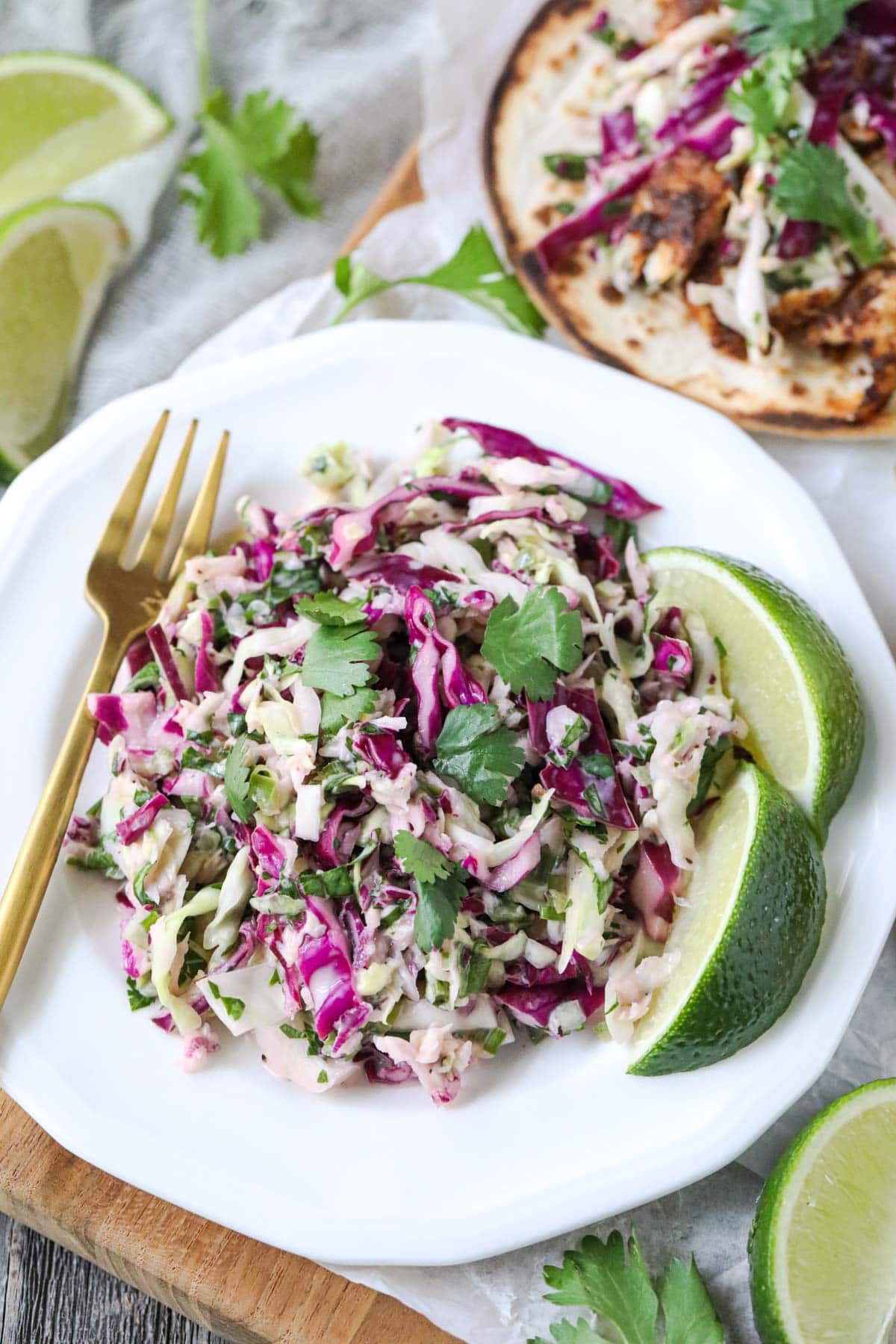 Can I Make This Slaw Vegan?

This slaw can be made vegan by substituting vegan mayonnaise for regular mayonnaise or by omitting the mayonnaise altogether. A tablespoon of mustard can also be added.

Slaw can certainly be made healthy depending on what ingredients are added to the dressing. The cabbage and other vegetables that slaws are made with are packed with nutrients.

To make a healthier dressing for slaw, try using Greek yogurt instead of mayonnaise or honey instead of granulated sugar for a natural sweetener.

What Is the Easiest Way To Shred Cabbage?

Cabbage can be shredded a number of different ways, but the easiest method is to shred it in a food processor with the shredder attachment. Just cut sections off a head of cabbage that can be pushed through the feeding tube of a food processor.

Shredding cabbage using a food processor takes mere seconds! You can also shred cabbage by hand using a sharp knife to slice thin sections of a head of cabbage or you can buy packaged pre-shredded cabbage.

Recommended Tools For This Recipe

More Easy Recipes You Will Love! 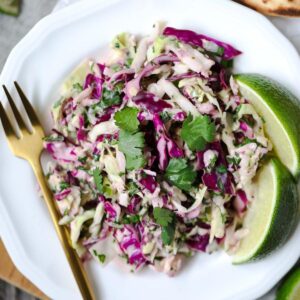 This slaw has the best texture when served within an hour or two of making it, but will keep in an airtight container in the refrigerator for up to three days.