This Shrimp Creole recipe is a classic Louisiana Creole dish featuring tender shrimp, a delicious tomato based sauce with lots of chopped veggies and the perfect amount of spice!

Join me in celebrating Juneteenth by checking out the list of contributors to the 2021 Juneteenth Virtual Cookout down below. 40+ black creators contributed to this collaborative menu as a Freedom Day tribute. Juneteenth marks our country’s second independence day, the final emancipation of those enslaved in the US, announced in 1865. Join in, share, and help us continue the legacy of celebrating progress. Additionally, you can easily follow each participant by using the hashtag #JuneteenthCookout2021 on Instagram.

If there is one city that is near and dear to my heart it's New Orleans. Being from Mississippi, this is a city I've had the pleasure of visiting several times. I love the Creole cultural influence present in Louisiana, especially in the delicious cuisine.

New Orleans and Creole Cuisine are the influence behind the recipe I'm sharing today. Shrimp Creole is a classic Louisiana Creole dish that features incredible flavors, including a tomato broth and what's known as the "Holy Trinity" to season the dish.

A Bit of Creole Cultural and Cuisine History

Creole people are of an ethnic group called ‘Creoles’, a term coined through creolisation, cultural, racial and linguistic mixing of the immigrants of Europe during the colonial era.

A big part of the Creoles were major ethnic groups in Africa (Cape Verde and Equatorial Guinea). Portuguese and African people made up a large part of the Creole group during this era and you can see their cultural influence heavily in Creole cuisine.

African link to Creole cuisine is perhaps strongest with regard to food preparation techniques and cooking methods. The most frequent practice, however, was the use of mortar and pestle for pounding dry peppers, seeds, nuts, fruits and vegetables.

This is how the well-known Creole "roux" originated and has transformed into the brown gravy sauce consisting of flour browned in oil along with browned vegetables that we know today. Roux is the base of many of today's Creole dishes.

Some other well-known Creole dishes are:

What Is the"Holy Trinity" In Creole Cooking?

The Holy Trinity in Cajun and Louisiana Creole cuisine is the base for several dishes in the regional cuisines of Louisiana and consists of onions, bell peppers and celery. The preparation of Cajun/Creole dishes such as crawfish étouffée, gumbo, and jambalaya all start from this base.

How to Make Spicy Shrimp Creole

In a medium skillet over medium heat, melt butter. Add chopped onion, bell pepper, and celery and cook until softened, about 5 minutes. Add minced garlic and season with salt, pepper, paprika, thyme, oregano, and cayenne pepper and cook until fragrant, another minute or two.

Add vegetable or chicken broth and bay leaves and bring to a boil. Add crushed tomatoes, reduce heat to a simmer and cook until reduced by half, about 12-15 minutes.

Add balsamic vinegar and brown sugar and continue to cook for another 10-12 minutes. Taste sauce after adding balsamic and brown sugar and add more seasonings to taste if necessary. I usually end up adding a good bit more salt, pepper, garlic powder, oregano and a pinch more cayenne pepper.

While tomato sauce is simmering, heat oil in a separate skillet over medium high heat. Add seasoned shrimp and cook until pink and opaque, about 2 minutes per side.

Add green onions and hot sauce to skillet with tomato mixture and stir to combine. Remove from heat and serve Shrimp Creole over cooked and buttered white rice.

You can store any leftovers in an air tight container in the refrigerator for up to three days.

To freeze Shrimp Creole, allow it to cool to room temperature then transfer to a large freezer bag. Remove as much air as possible and store bags of Shrimp Creole lying flat on a freezer shelf for up 30 days. Thaw frozen Shrimp Creole overnight in the refrigerator.

You Will Also Love This Blackened Catfish and Smoked Gouda Grits Recipe! 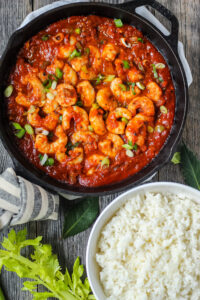 Nutrition facts do not include rice.

Check Out These Other Incredible Black Food Bloggers and Their Contributions to the 2021 Juneteenth Cookout!

Watermelon and Cucumber Salad by Heal Me Delicious

Grilled Hot Links & Chow Chow by Meiko And The Dish

Vegan Ranch Style Beans by Collards Are The Old Kale

Sweet and Tangy Coleslaw by Crumb-Snatched

Strawberry Baby Back Ribs by This Worthey Life